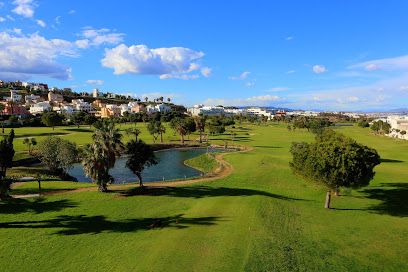 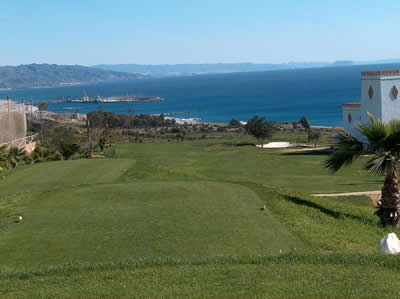 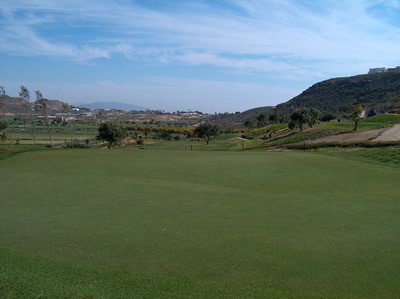 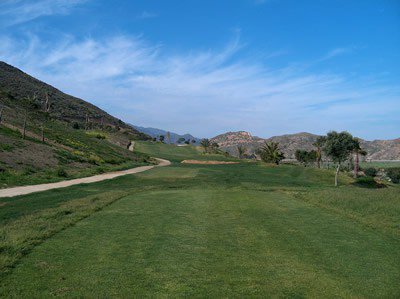 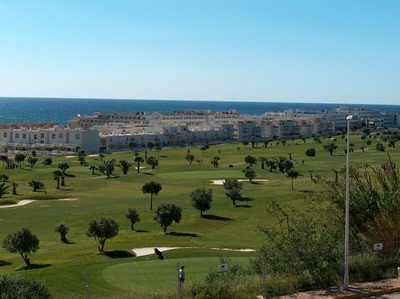 Marina golf club is sited within the Marina de la Torre estate, overlooking the sea at the foot of the hills from which the whitewashed Moorish town of Mojacar dominates the surrounded area.

The Marina Golf Course has two distinct halves! The first 3 holes are on a plateau overlooking the sea with spectacular views. You are then treated to one of the most spectacular golf holes in Spain, the Par five 4th hole, as you climb the rocks you are left to play another 10 holes in a truly peaceful valley.

Its then back to the beach view plateau for the remaining holes.The Mojacar Marina Golf Club is situated in the famous tourist area of Mojácar, and is one of the most attractive courses in the area. It was designed by Ramón Espinosa, whose philosophy was to combine the flat areas with the more mountainous terrain in a relatively small space, that is ideally suited for a golf course of this type.

The course, divided into two parts by a high promontory, has 18 holes and a par of 71. It is situated inside the Marina Torre housing development. There are marvellous views all around: the sea on one side and crops growing on the other, giving It its own particular personality. Nine holes can be played on the flat area near the beach, while the other nine holes are played near the mountains with different views and almost a different climate. There are spectacular tees from some holes, with excellent fairways and three lakes strategically placed along the way to make play all the more interesting.

The club is in the middle of a popular tourist area, and this is reflected in the wide range of activities within short driving distance: 17 kilometres of excellent beaches and coves, most of them quite empty for most of the year, with plenty of different water sport activities available in the Garrucha marina. The landscape is unforgettable here, with lonely desert landscape close by, and Mojácar itself one of the most fascinating old Moorish villages in Spain. Its narrow and winding streets recall a distant past, with the white houses glistening under the warm Mediterranean sunshine.

How to get to Marina Golf Mojacar , Almeria (Spain)

Almería -Murcia Motorway, exit for Mojácar-Garrucha. From Mojácar take the road to La Garrucha. After 3 km. you will arrive at the club which is next to the sea.

How to go: Placed in the municipal district of Mojacar, 40 minutes away from the Murcia and Alicante Airports through the motorway, exit in Almería- Turre. It is situated between Mojacar and Garrucha, on the coastline of Mojacar Playa.

Marina Golf Mojacar is not yet in our pool of Golf Courses for orders.